A Day with an Elite Ultra Marathoner!

Since joining Hyderabad Runners in September 2011, I have had the chance to meet some really inspiring people. Arun Bhardwaj (http://arunbhardwaj.wordpress.com/about/)  is definitely amongst the top of that list. It is said that for ordinary people, marathoners are a mystic and for marathoners, Ultramarathoners are an enigma. Arun surely is. 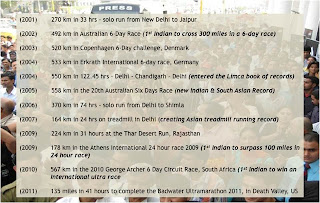 Saturday March 17, 2012 was decided as the date for Annual Dinner of Hyderabad Runners and Arun was designated as the Keynote Speaker for the event. He arrived in Hyderabad on Friday evening and the group ran with him on Saturday morning. That’s when I had my first glimpse of GOD.  I was given the chance to chaperone him around town and was amazed at his humility and down to earth nature. He is a pure vegetarian, teetotaller and one of the few real time practitioners of simple living and high thinking. Mind you he IS amongst the best in the world. But no airs at all. Few salient points from my time spent with him.
I can keep going on but I think I'll rest here due to paucity of time and space. He also shared few of his upcoming plans but it wouldn’t be prudent on my part to reveal them here. But I can assure you, your jaws will definitely drop when you hear about them.


I further quote a section from a friend’s blog (Taken from http://runbrajeshrun.blogspot.in/)

If there is something that you think you cannot do because of circumstances in the past or you not being in the right place at the right time, or because of your physical, mental or genetic make-up, all that you are doing is telling the world – and yourself – a bunch of lies.

Saturday 17th March 2012 will remain a red letter day in my life. To me, Arun Bhardwaj is the living embodiment of these simple but powerful words:
Impossible is just a big word thrown around by small men who find it easier to live in the world they've been given than to explore the power they have to change it. Impossible is not a fact. It's an opinion. Impossible is not a declaration. It's a dare. Impossible is potential. Impossible is temporary. IMPOSSIBLE IS NOTHING !